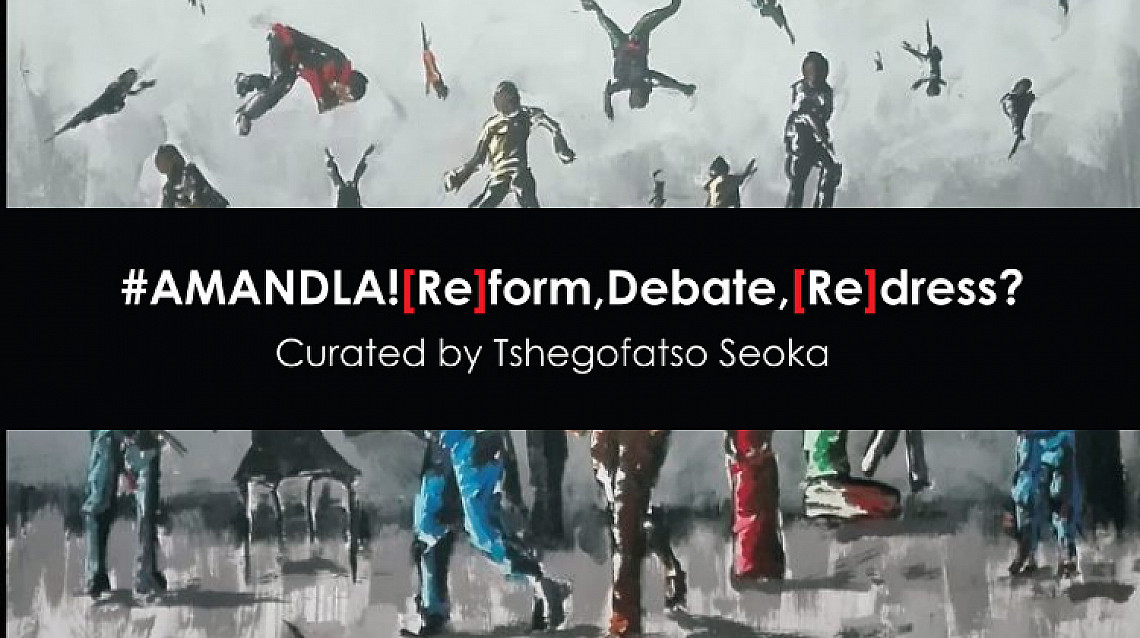 The exhibition #AMANDLA![Re]form,Debate,[Re]dress? aims to challenge and encourage viewers to develop conversations and debates about ‘Resistance Art’ and the visual representation of resistance in South Africa during the apartheid[1] and post-apartheid eras.

‘Resistance Art’ is not a new genre or concept within the scope of South African art, and of late some critics have gone as far as calling it “dead”. Gael Neke, South African based visual artist and writer mostly influenced by art as a tool for activism, confirms the latter by stating “Protest art in its definition of resistance to apartheid, no longer exists in this post–apartheid moment” (1991:1). Mario Pissara, South African artist and writer also indicates the emergence of new terms such as ‘African Figurative Expressionism’ which relate to the works of artists such as Dumile Feni (1942-1991) and Julian Motau (1948 – 1968) (2006:50). Other terms such as ‘Protest Art’, ‘Socio –Political Art’ and ‘Activist Art’ have also developed in the redefinition and reclassification of that particular genre.

An interesting addition to this subject matter is the progress of resistance into the current digital age, and the vital role that social media plays in current political protesting. The hash tag (#) symbol appears to contribute to visualize, verbalize and accentuate protest. #Feesmustfall, #RememberMarikana and #TshwaneProtests[2] form part of the recent movements and unrest activities present in the South African social and political sphere. The acceleration and intensity of these movements can be argued to be fuelled by their presence on social media when attached to the hash tag symbol. The hash tag sign can be said to be ubiquitous within the internet, \ and visually (#) it seems to mimic the drawing style of cross hatching, emphasizing the importance of the text which is then highlighted as a point of discussion and simultaneously turned into metadata.

The artworks selected for the #AMANDLA![Re]form,Debate,[Re]dress? exhibition were sourced from the Permanent Collections of some of South Africa’s most prestigious art museums, galleries and art institutions such as Oliewenhuis Art Museum, William Humphreys Art Gallery, Unisa Art Gallery, Johannesburg Art Gallery, Everard Read, and Legacy Art Projects. The selection of artworks reflects contemporary representations of visual resistance by emerging as well as established South African artists and photographers. Included in the exhibition will be traditional ‘Resistance Art’ artworks by William Kentridge,  Dumeli Feni, Julian Motau and Norman Catherine and more current artworks by artists such as Asanda Kupa, Ayanda Mabulu, Blessing Ngobeni, Michael Selekane and Setlamorago Mashilo, with the aim to visually explore concepts such as Traditional vs. Contemporary representations of ‘Resistance’, ‘Resistance and identity formation’ as well as ‘Land and Space in South African representations of Resistance’.

[1]  A social system that was applied in South Africa based specifically on segregation and economic discrimination against people from other racial groups (non- whites) by the white minority  (Merriam Webster online dictionary, 2016)

[2] #FeesMustFall refers to the student protest movement that began in October 2015 as a response to the increase in fees at South Afican universities, whereas #RememberMarikana refers to the visual movement that arose after the killing of 34 protesting miners in Marikana, South Africa, who were protesting for wage increases, and #PretoriaProtests refers to the destructive and violent protests which erupted in Pretoria/Tshwane in 2016 after the announcement of the mayoral candidate for Tshwane.